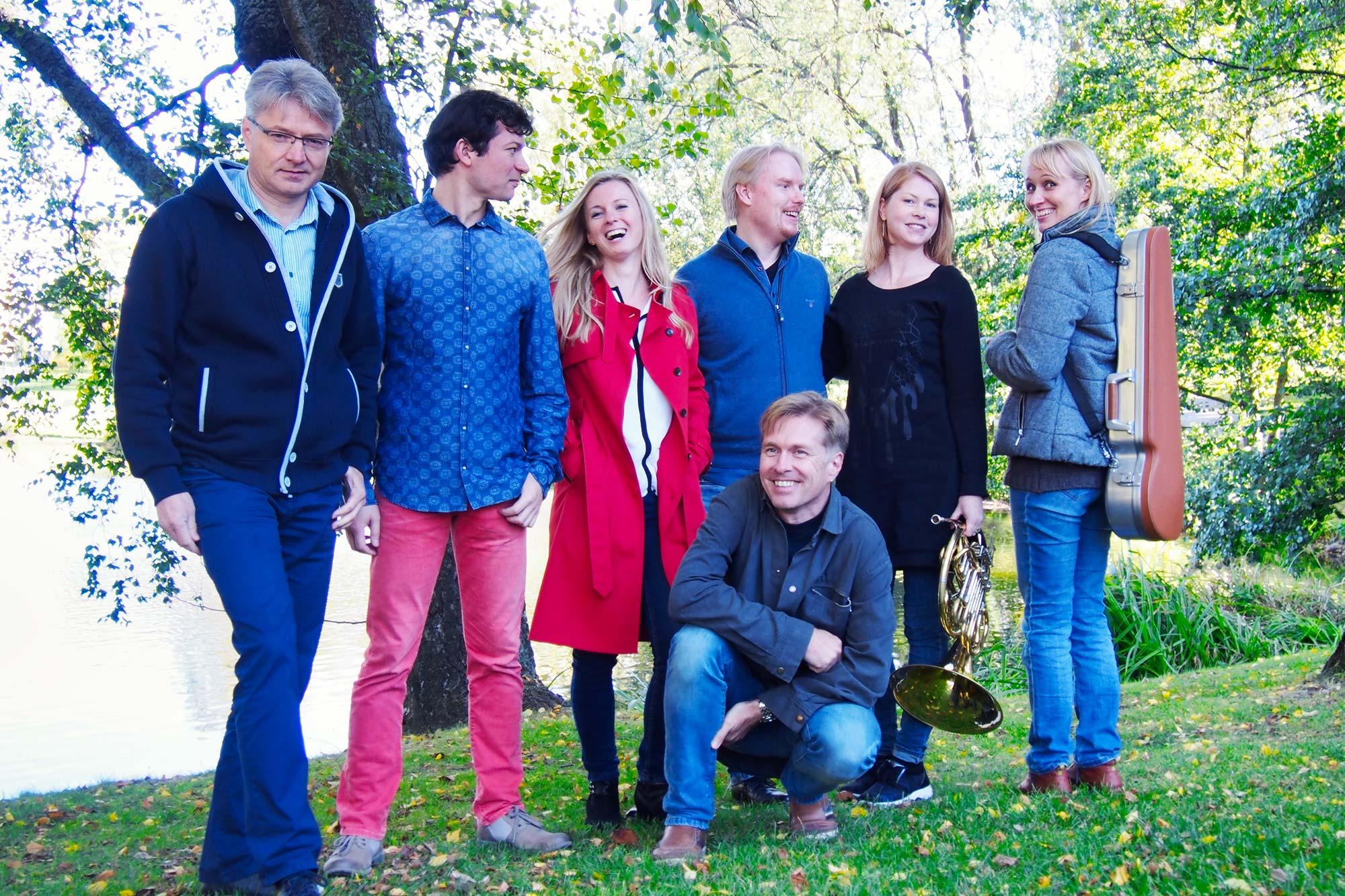 TampereRaw, established in 2001, is a chamber ensemble mostly consisting of members of the Tampere Philharmonic and focusing from the first on new Finnish concert music.

When violinist Kreeta-Julia Heikkilä commissioned me to write a work for violin, clarinet, cello and piano based on Finnish folk tradition or music in some way, my ironic mind immediately came up with an antithesis: I decided that the work would be based on a tune that is neither Finnish nor a folk song. Perhaps this reflects the rootlessness and detachment from tradition of our times in some way. Or at least that is one way of looking at it. I believe that the underlying tune is quite familiar to many listeners, but discretion prevents me from naming it here.
per aspera is a loosely conceived set of variations. The aforementioned tune, fashioned into a 12-tone row, appears in a variety of highly contrasting guises. The work culminates in a wistful and melancholy sequence that concludes with the tune played by the cello in pizzicato as the violin, clarinet and piano accompany it in soaring arcs. The conclusion is serene, aloof and meditative. The work demonstrates that transition that has been going on in my idiom for a long time, leading me to work more and more with triad-based material, albeit with 20th-century and 21st-century methods. My aim is to produce an increasingly sonorous texture rich in overtones.
– Tuomas Turriago

The Droplet and the Ocean

The Droplet and the Ocean was inspired by an early miniature by Jean Sibelius, Vattendroppar [Drops of water], a miniature for violin and cello in pizzicato whose sound I wanted to import into my piece. The droplet appears as brief pizzicato flashes moving from one instrument to the next. The journey begins buoyantly, then other droplets join in, and before long we travel through a variety of streams and swirls. The second element, the ocean, is present in cluster waves on the piano. The clarinet and violin are also at times sucked into the vortex, adding rapid passages, whirlpools and murmurs to the texture. The droplet and the ocean meet in various ways: playfully, wildly, mysteriously and darkly. Finally, everything grows calm as the droplet merges into the ocean. I wanted this piece to be bright, as it was inspired by sunny Reetta, to whom I dedicated the work. The Droplet and the Ocean was premiered at an event of the Hokkaido Sibelius Society in Sapporo, Japan. This was the reason why I chose to base the work on a droplet-sized reference to Sibelius, whose music can span the oceans.
– Jonne Valtonen

Throughout my two decades as a professional composer, many of my works have stemmed from an extra-musical inspiration. Often I have drawn on the environment or natural phenomena, as with the String Quartet La Spada del Sole [Sword of the Sun] (2008), Los Sonidos de la Luz [Sounds of Light] for violin and piano (2018), the solo accordion works Vuo [Flow] (2005) and Jiän iänj [Sound of Ice] (2014) and the chamber orchestra suite Siinto [Vista] (2017). I abandoned having an identifiable personal idiom in the early 2010s, and in recent years I have come to write a musically broad range of works. My output from this period includes some real screwballs, such as the Oopperaa arjessa [Opera in the everyday] (2010–2014) trilogy that combines performance art with operatic idioms, and pastiches like the Neo-Classical Liikutus [Movement] for chamber orchestra (2020) and many of the miniatures in Livesävellysprojekti [Live composition project] (2014–) written in concert according to parameters given by the audience and given sight-read premieres by the musicians on the spot, at the end of the concert. Taival [Trek] (2019) has a strong nature component in it. It is similar to Siinto in representing a sort of ‘Neo-Kokkonen’ style. This is an aesthetic approach that is good not only for representing experiences of nature in music but also for annoying contemporary music purists. I wrote Taival straight off from start to finish, with no other sketches than recollections of a trek in Tiilikkajoki National Park. The genesis of the work was mystical and the music generated itself, in the spirit of Einojuhani Rautavaara, whom I greatly appreciate, and other Finnish ‘old-school’ composers of the late 20th century.
– Pasi Lyytikäinen

Henri authorised me to write something about his piece. I first came into contact with the music of Henri Sokka in autumn 2013, when Jouni Kaipainen phoned me in some anguish and asked whether I could learn Henri’s Piano Sonata at short notice, the original performer having broken a wrist. The premiere was less than two weeks away. I took up the challenge and found Henri’s musical idiom easy for me to approach. The premiere went well, and we continued to collaborate quite soon; I commissioned Henri to write the Piano Quintet Nää virrat unieni alla [These streams under my dreams] with a grant from the Madetoja Foundation, and it was premiered in 2015. Völjy is a lucid, happy work. For me, it reflects the goodness that constantly surrounds us, despite the worst efforts of humanity.
– Ville Hautakangas
(The work forms part of a series of 12 premieres commissioned by pianist Ville Hautakangas.)